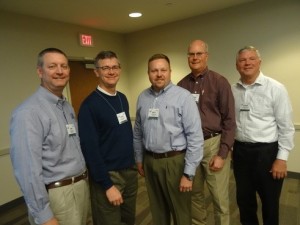 At the meeting, the new 2015-16 Executive Board was installed, including Chip Blalock of Sunbelt Ag Expo, as President, David Zimmerman of Southern Farm Shows as Vice-President, and Matt Jungmann of the Farm Progress Show and Husker Harvest Days as Second Vice-President. Dennis Alford of Power Show Ohio served as the president for the 2014-15 board, and Chuck Gamble of Farm Science Review will continue as Secretary-Treasurer/Coordinator.

Chip Blalock, the 2015-16 President said, “This Council remains as important as ever. We come together to have close discussions, wrestle with agricultural issues, and above all: keep all of our ag shows relevant and continue to set the bar high for both exhibitor and attendee expectations.” Farm Show Council facilitates candid discussions, counter-evaluations, and periodic peer-audits.

The next Farm Show Council meeting will be hosted by World Ag Expo in Tulare, California, from April 25-27, 2016.

The Farm Show Council has been an Associate member of EMDA since 1990.