EMDA Board of Directors elected during Convention in Kansas City 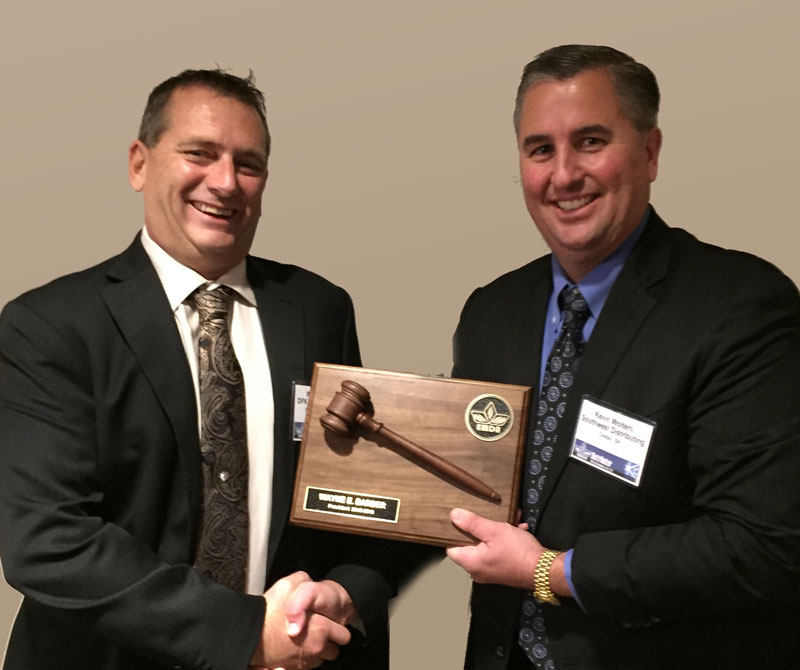 Barber earned a degree in Agricultural Business Management from Centralia College of Agricultural Technology in 1979 and joined DFK Equipment Sales in 1987. He had previously worked for the Royal Bank of Canada, before serving as Manager of Barber Farms Ltd. from 1980 through 1987.

DFK Equipment Sales Inc. has been in the business of marketing equipment for more than 30 years and is committed to developing markets for manufacturers with top performing dealers strategically selected throughout Ontario, Quebec and the Maritime Provinces to promote and market these products. The firm’s current 20,000 sq. ft. warehouse is located in St. Marys, Ontario and is supported by four salesmen, service personnel and parts department with bilingual (French and English) support. DFK Equipment Sales, Inc. has been a long-time member of both FEWA and AIMRA.

Barber has been married to his wife Sherri since 1986 and the couple has four children: Kevin, Chris, Nicole and Jeff.

To comply with the EMDA Bylaws requirement of a minimum of five officers, a Nominations Committee was formed, consisting of Ted Traeder, Traeder Enterprises, Inc., Hillsboro, Wisconsin, as Chairman, along with Marcus Kimball, Kimball Sales, Lake St. Louis, Missouri and John Fonda, John Day Co., Omaha, Nebraska. The Nominations Committee submitted Ron Chandler, Becknell Wholesale Co., Lubbock, Texas, for re-election to the E.M.D.A. Board of Directors, serving as First Vice President. The Nominations Committee also submitted Steve Prouty, McNeil Marketing Company, Albany, Oregon, for election to an initial term as a Director on the Board.

As President, Barber will head EMDA’s seven-member Board of Directors and the Association’s Staff in supervision of member services to EMDA’s U.S. and Canadian member firms and their branches and associate members located worldwide. He will preside over official EMDA activities for the coming year, including the Association’s administrative meetings and the 2016 Fall Convention in San Diego, California. EMDA’s headquarters is located in Iowa City, Iowa.

The Board meets once in the Spring and twice during the Fall Convention, and also participates in semi-monthly conference calls. ###