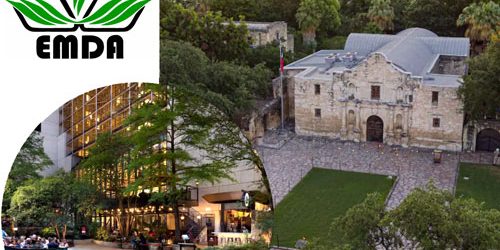 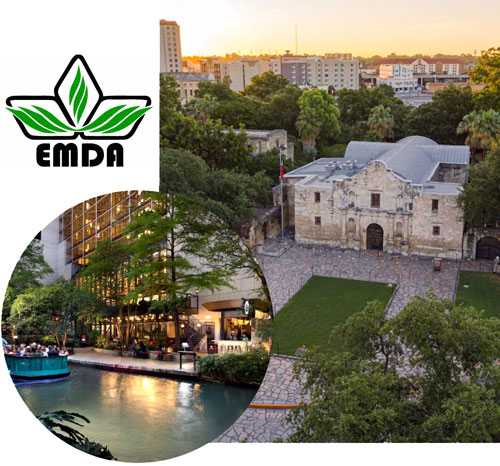 Mark your calendars and plan to join your fellow EMDA members at the Hyatt Regency San Antonio River Walk hotel in San Antonio this April 3 & 4. Registration opens soon — In the meantime, a brief agenda for the meeting is available on the EMDA web site.

Begin Your Adventure at the San Antonio River Walk Hotel: From its soaring windows to its beautiful water feature, the light-filled atrium lobby sets the scene for your time here — at the only hotel located on the River Walk and overlooking the Alamo. Experience the arts, shopping, historic attractions, and other nearby activities.

From its founding as a Spanish mission to its role in the Texas Revolution, San Antonio has deep cultural roots. Within view of our hotel lies the Alamo — one of the country’s most popular historic sites — and the hotel doors open directly onto the River Walk, offering the ideal starting point for discovering the city’s charm.

San Antonio River Walk – This shaded oasis lined with shops and eateries lies just below street level and connects many of the city’s attractions. Explore the city on foot, enjoy an alfresco meal, or hop on a barge for a tour. Our hotel offers direct access to get started.

The Alamo – Built in the 18th century by Spanish missionaries, the compound later housed a military unit and was the site of a historic battle in 1836 during the Texas Revolution. You can tour the buildings and gardens and see artifacts from its storied past. The Alamo is 1/10 of a mile away from our hotel.

San Antonio Missions National Park – Named a UNESCO World Heritage site along with the Alamo, the park connects four Spanish missions on eight miles of walking and bike trails. The buildings range from fully renovated to unrestored, for a fascinating look into Texas history and culture and is only 8/10 of a mile away.

Keep watching your email, the blog posts, and our social media channels as updates are announced.