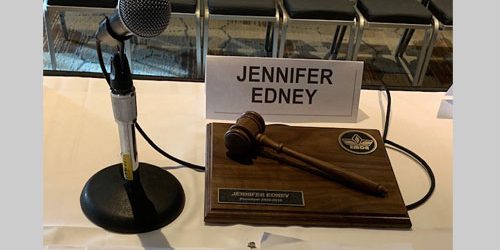 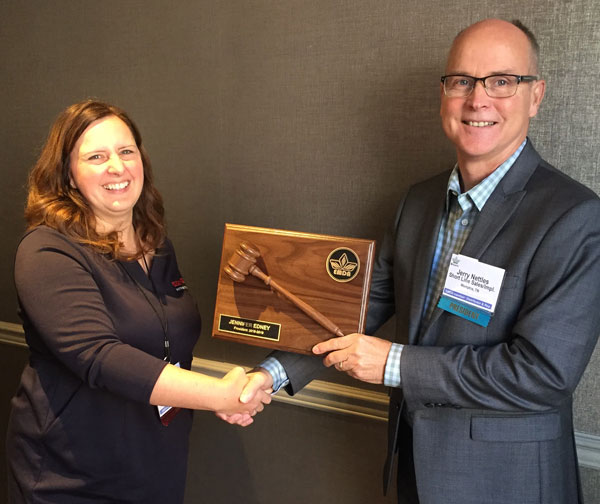 As President, Edney will head EMDA’s seven-member Board of Directors and the Association’s Staff in supervision of member services to EMDA’s U.S. and Canadian member firms and their branches and associate members located worldwide. She will preside over official EMDA activities for the coming year, including the Association’s administrative meetings and the 2019 Fall Convention in St. Louis, Missouri.

Thank you, Jerry. It’s an honor to stand here today and to receive the gavel from someone I hold in such high esteem.

Though I am the first woman to take on this role, I am not the first Edney. In 1999, my father Doug Edney accepted this gavel along with the responsibility when he became president of the Farm Equipment Wholesalers Association or FEWA. He, along with many of you, have faithfully shepherded this association over the decades and generations, through mergers and disagreements, and through times of plenty and through times that were lean.

I am grateful for the commitment and dedication of all of the association’s past presidents. You have been generous with your time and experience. Together you have built a remarkable association, one that I’ve been proud to serve for the past four years. This is the foundation that today’s board and I will build on. I don’t have to tell you all that we are in a time of rapid change with forces of disruption coming at us from many angles. We are called to evolve. We are called to innovate.

You have my commitment to answer this call, but the board and I can’t do it alone. Watch for more communication, invitations to get involved, and opportunities to share your ideas. I challenge you all to join me as we honor the rich history of FEWA, AIMRA, and EMDA while looking to the future with strategic vision to imagine the future of the organization.

After more than a decade in the industry I realize that facing change takes courage, especially when facing uncertainty. I’d like to share a quote with you from Jessica Honegger’s book, Imperfect courage: “Imperfect courage is the only kind I possessed but it was courage nonetheless. Instead of wanting fear to subside, I made it my friend. When you’ve got a vision, you don’t have time to wait around for your fears to vanish before you start moving. Perhaps the hero’s journey is not for a few brave people after all, but it is an invitation to me, to us all, to rally our imperfect courage and go do the thing we’re meant to do.”

In closing, I’d like to share a quick personal story. After I received the call from L.R., Marcus, and the nominations committee inviting me to participate on the board, I walked into my dad’s office and told him that I’d accepted the role. I also told him that I wasn’t sure I had the experience to make a difference and felt that the board would probably rather have him in leadership. With his characteristic humility and grace along with a twinkle in his eye – my dad laughed and told me that nearly 20 years before he had sat down with his father, Milt Edney, and said the exact same thing.

It is with tremendous respect, heartfelt gratitude, and imperfect courage that I follow in their footsteps in service to the people of Edney Distributing and to you, my fellow members of EMDA. Thank you.

Edney earned a Bachelor of Science degree in Child Psychology from the University of Minnesota, a Professional in Human Resources designation from the HR Certification Institute, and a Wholesale Distribution Management Certificate through The Ohio State University’s Executive Education Program. She participates in national and regional gatherings of The Employee Stock Ownership Plan Association and the Society for Human Resource Management. Jennifer joined Edney Distributing Company, Inc. in 2008 to support the Company in a time of change and is currently the company’s Vice President. Prior to working in the family business, she held sales, operations, and management roles at companies including Gateway, Target, and The Hartford.

Founded in 1951, Edney Distributing Company, Inc. serves its thriving dealer network from four warehouses in the Upper-Midwest using state of the art technology and systems. They supply innovative attachments, specialized equipment, and parts from manufacturers around the world. Edney Team Members offer dealers marketing, logistics, warranty support, and training along with other value-added services. The dedicated employee owners who make up Edney’s team are problem solvers who work together to help others including customers, suppliers, and their communities.

Jennifer is married to John Schrieber and has two teenage children: Alex and Ellen. Together they enjoy travelling, cheering for the Golden Gophers, and engaging with causes close to their hearts including environmental sustainability, mental health, and animal rescue. They live in Woodbury, Minnesota where she serves as a member of The Grove United Methodist Church’s Core Team and a DFL Precinct Chair. Edney Distributing Company, Inc. is proud of their longtime membership and active participation in EMDA. The Company joined FEWA in 1963, led by her grandfather Milton Edney. Jennifer’s father, Doug Edney, is the President of Edney Distributing Company, Inc. and is a FEWA Past President.