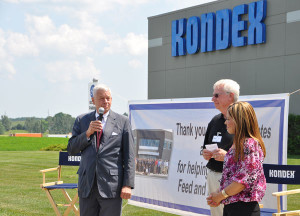 Corporation recently hosted a joint event that included an I Make America Harley Tour and brat fry at its Lomira, Wisconsin facility. The I Make America Harley Tour was part of a nationwide campaign to press Congress to support pro-manufacturing policies. An estimated 200 attendees signed up to support I Make America, and in doing so, were entered for a chance to win a custom-painted 2014 Harley-Davidson Road King. Congressman Tom Petri; Camille Solberg, Regional Director for Senator Ron Johnson; and other local officials had an opportunity to speak with Kondex associates and the community. 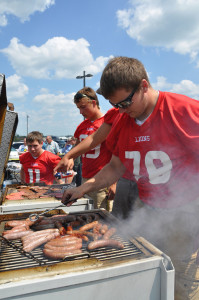 Kondex’s brat fry drew a large community gathering, with proceeds of nearly $1,100 benefitting the Lomira High School Gridiron Club. Kondex donated another $4,000, for a total contribution of $5,067.97 that will be used toward the purchase of new concussion-resistant helmets for the school’s football program. Members of the football team and coaching staff were on-site grilling and serving throughout the day. Kondex would like to thank A to Z Vending for its generosity in donating all the beverages for this event, as well as Weld Specialty Supply for donating the helium tank rental for balloons.

“This was an excellent opportunity to bring the community together to not only support the safety of its local football club, but also get a glimpse into the manufacturing industry and the importance our elected officials play in growing our industry and local economy,” commented Kondex President Jim Wessing. “We were very pleased with the positive turnout, the demeanor of the young men who represented Lomira High School, and the collaboration between all involved in the success of the day’s events.” 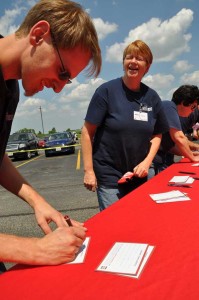 Kondex manufactures and engineers cutting and wear parts for the agricultural, commercial turf care, construction, and forestry markets. While Wisconsin-based, the Company supplies its products to original equipment manufacturers on a global scale. For additional information, please visit www.kondex.com.