The EMDA and FEMA Joint Opening Session will be held Wednesday, October 26 at the Hilton Orlando Lake Buena Vista hotel and is designed to bring the members together to “kick-off” their conventions with a dynamic presentation that will set the tone for an intensive week of appointments and meetings. 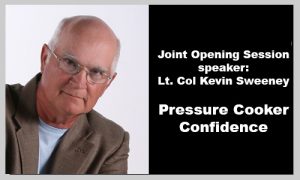 Lt. Colonel Kevin Sweeney is a nationally respected and recognized expert on leadership, the value of being a great teammate, and performance under pressure. He has been a requested guest on over 450 radio stations in the United States and Canada appearing on talk radio where he has inspired audiences with his unique insights into leadership, teamwork, and putting yourself into position to have superior performance under pressure.

For more than a quarter of a century Kevin has been a successful Business Executive at an elite Fortune 50 Company. He has also been a Director at an industry leading software company. Kevin’s experience in sales and operations will give you and your team unique experiences for your success. Kevin will teach you how to compete and how to put yourself and your team in position to differentiate yourselves from the competition and win in the market place. From his leadership experiences you will learn how to have confidence under pressure and how to demonstrate decisive and effective leadership.

Kevin’s real life story describes a combat mission during which the two engines on his left wing were totally ripped off in mid-air, in the darkness of night, while at maximum weight and on a combat mission. It is a compelling story illustrating how your team can overcome any obstacle facing them. He transforms the lessons his team learned into business examples for the benefit of your team.

For their incredible aeronautical feat Kevin and his team were awarded the United States Air Force Distinguished Flying Cross. Kevin understands the value of being a great teammate before, during, and after the event when the Heat is On. Kevin is not just a leader of great teams, he truly understands teams.

Kevin is a combat veteran having flown missions in both Viet Nam and Desert Storm. He spent 23 years in the Air Force and Air National Guard attaining the rank of Lt. Colonel. The teams’ incredible flight, successfully recovering the severely crippled aircraft, has been featured in a September 1992 Reader’s Digest article titled “Bring Them Home” and a featured segment on the A&E channel titled “Wings Over the Gulf.” The experience is also the subject of Air Force training tapes in use today. Kevin is the author of two captivating books: Pressure Cooker Confidence, How to Lead When the Heat is On and Conversations with the Colonel, Lessons in Life, Leadership, and Wisdom.

Register for the EMDA Fall Convention and don’t miss this session to learn the leadership tools required to give both you and your team a laser beam focus on the objective and the confidence needed to make you both successful.

Don’t Delay – it’s NOT too late to get earlybird discount for EMDA’s Industry Showcase
September 23, 2022

EMDA to host Golf Outing this fall in Orlando
September 14, 2022