Air Service: There are hundreds of non-stop flights in and out of Luis Muñoz Marín International Airport (SJU) every day. Chicago is less than five hours away. New York, under four. And Panama City, under three. Just hop on a plane, take a nap, and wake up in San Juan; or, in any of our other convenient airports like Borinquen Airport (BQN) in Aguadilla, or Mercedita Airport (PSE) in Ponce.

Getting around once you’re in Puerto Rico is easy. Taxis are everywhere and your favorite rental car companies are all here. 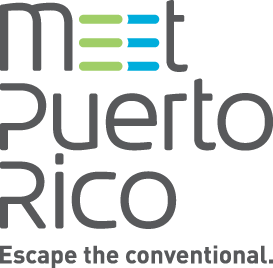 We might be a tropical island in the Caribbean, but we’re also a U.S. Commonwealth. That not only means you can travel overseas and not have to carry a passport if you’re a U.S. Citizen, it means your flight is considered domestic. Here are some other interesting and note-worthy facts:

CLIMATE: It can be really boring for a meteorologist here. The average year-round temperature is a balmy 82º F (28º C), with mild easterly trade winds. Most days are sunny and stunning, although there tends to be a bit more rain between August and October.

CUISINE: In Puerto Rico you will find just about every type of ethnic cuisine here that satisfies every palate, including our local “cocina criolla” which you must try as soon as you arrive. There are also plenty of major American fast-food and casual dining chains island-wide.

CURRENCY: Puerto Rico is a U.S. Commonwealth so the U.S. dollar it is. No need to exchange currency. ATMs are generally easy to find. Most businesses accept major credit cards, as well as traveler’s checks.

CUSTOMS AND DOCUMENTS: Passports aren’t needed for U.S. citizens who travel between Puerto Rico and the U.S. (Perk of being a U.S. Commonwealth.) Foreign nationals should have valid passports and visas as required. Travelers flying from Puerto Rico to the U.S. are subject to check-in baggage inspection by the U.S. Department of Agriculture at the airport, since taking certain fruits and plants into the U.S. mainland is prohibited. For more information, call 787-253-4505 or U.S. Customs at 787-253-4533.

DRIVING: If you do need to drive anywhere just keep in mind that gas is sold by the liter and distance is measured in kilometers. Speed, however, is measured in miles per hour. Many national and local car rental companies operate at the airport and at key locations in the tourist districts.

SIZE AND POPULATION: Puerto Rico is approximately 100 by 35 miles (160 by 56 km), which is roughly the size of Connecticut. The Island‘s population is 3.6 million.

TIME: Puerto Rico is on Atlantic Standard Time (AST), which is one hour later than U.S. Eastern Standard Time (EST) from October through March and the same as Eastern Daylight Saving Time from April through October.