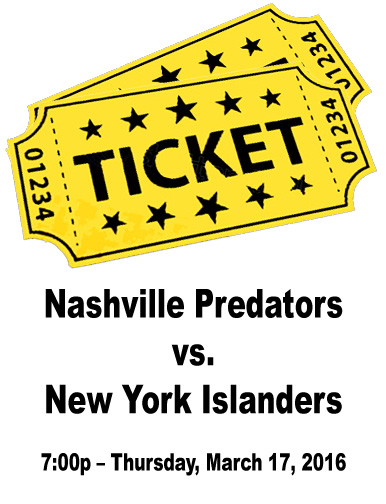 If meeting with your distribution peers in one of the most popular cities in the U.S. isn’t enough – how about taking in an NHL game too?!

EMDA’s Spring Management Workshop is scheduled for March 18 & 19 at the Renaissance Nashville Hotel. Registration for the meeting opened last week. Most attendees will want to arrive on Thursday, March 17 – and now EMDA is pleased to offer discount tickets to an NHL game that night – the Nashville Predators take on the New York Islanders.

The Nashville Predators are a professional ice hockey team based in Nashville, Tennessee. They are members of the Central Division of the Western Conference of the National Hockey League (NHL). The Predators joined the NHL as an expansion team in the 1998–99 season, and play their home games at Bridgestone Arena. The Bridgestone Arena is about a 5-minute walk from the Renaissance Nashville Hotel.

Deadline to order tickets with the EMDA group is March 1, 2016.