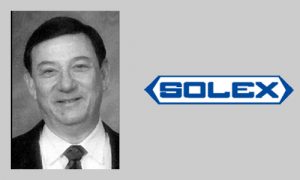 David Fountain, General Manager, Solex Corp, Dixon, California, passed away on July 31, 2022 at the UCD Medical Center after a short struggle with a rare skin cancer. He was surrounded by his family. He is survived by his wife Lauri, daughter Carrie, son Chad and daughter Nicole. Also, survived by a brother, Darryl (Treva) and nephews and niece.

David was born January 21, 1945 in Sacramento to Boyd and Vera Fountain. He attended Dixon schools graduating from Dixon High School in 1963. He went on to attend Cal Poly San Luis Obispo for two years and an additional year at Sacramento City College.

The Vietnam war came along, and David enlisted in the Air Force Reserves at Travis Air Force Base. Upon returning from training, he began working for his dad at Solano Tractor. After a few years, he began running their side business which became Solex Corporation. Solex became members of FEWA in 1973, and the Fountains have been regular attendees at the annual Fall Conventions ever since.

David married Lauri Leathers in 1967 and they would have celebrated their 55th wedding anniversary on August 26. Of this union, they had three children: Carrie Fountain-Davis (Dwayne); Chad Fountain; and Nicole Fountain Long (Jeffery). They have six grandchildren:  Gillian, Hayden, and Myles Davis, Ian Fountain, Rune and Daphne Long.

David was preceded in death by his parents, Boyd and Vera Fountain.

In lieu of flowers, donations may be made to the Dixon High School FFA or to a charity of the donor’s choice.