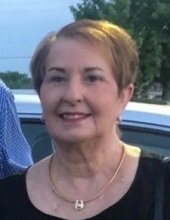 Funeral Services for Judy Sights, 70, of Clinton will be held at 10 a.m. Thursday, July 2, 2020, in the First United Methodist Church officiated by Rick Robart and Doyle Kinney. Burial will follow in the Clinton Cemetery under the direction of the Kiesau-Lee Funeral Home.

Judy Ann Sights was born on January 8, 1950, to Homer and Georgia (Crawford) Johnson in Harrison, Arkansas and died peacefully on Monday, June 29, 2020, in Oklahoma City. Judy was raised and graduated from high school in Harrison, Arkansas. She married L.R. Sights on September 11, 1969, and they celebrated their 50th Anniversary in 2019.

She is survived by her husband, L.R., of the home; daughter Cindy Sights Wolters and husband, Kevin, and two precious grandsons, Bryce and Blake Wolters, all of Clinton; two brothers, Ronnie Johnson,, and Jerry Johnson and wife Debbie, all of Harrison, Arkansas; a sister in law, Carolyn Buckenmaier and husband, Chet, of Fort Myers, Florida; and numerous nieces and nephews.

She was preceded in death by her parents, Homer and Georgia Johnson.

Those that knew Judy knew that she loved traveling with family and friends, shopping, and talking on the phone to her beloved friends. She was active in PEO, Junior Service League, and the First United Methodist Church.

Judy was a regular attendee at EMDA events and was “FEWA First Lady” when L.R. Sights, Southwest Distributing Co. served as Association President in 2001. She will be missed by many.

In lieu of flowers, the family asks that donations be made to the First United Methodist Church of Clinton or the Clinton Public School Foundation.