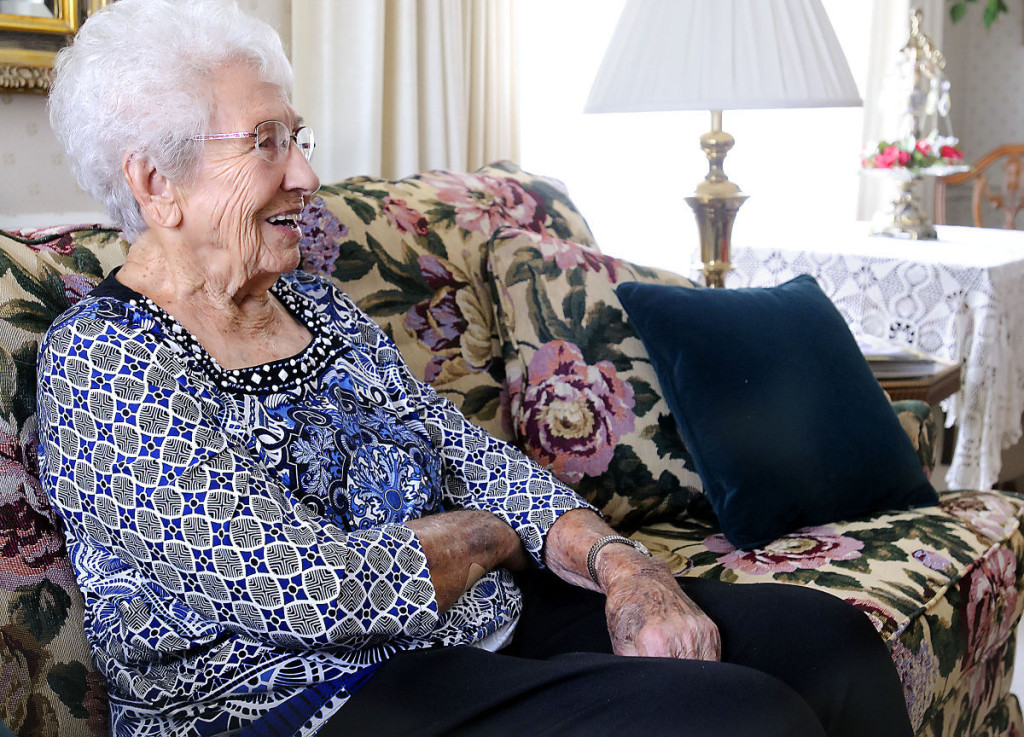 Lucy Ellis of Logan is one sharp lady. In the span of a hundred years, she grew up during the Great Depression, she experienced loss and heartache more than once and landed on her feet each time. She raised a family and was a successful businesswoman, operating a farm equipment business long after her husband’s death.

Born in 1915, she has a crystal-clear memory and can tell you about growing up on the outskirts of Logan — the south boundary of Logan at the time was at in the area of 600 South. Her father, a Swiss immigrant, held a job in Logan but also had a small farm. She helped on the farm, although she never milked the cows. She said her three older brothers wouldn’t show up to milk if she did.

Her family didn’t own a car, so when she attended schools in Providence and River Heights she walked, and she took the train to Hyrum, where she attended South Cache High School and graduated as a valedictorian. The family’s home was located at 986 S. Main Street, right across from Johnson’s Grove, a popular area for recreation in the early part of the 20th century. It was a gathering place in a grove of trees located roughly between Walmart and the current Wells Fargo Bank at 889 S. Main. It was a place where people gathered to watch baseball games, get a hamburger or a hot dog, dance on the open-air dance floor or play on the rope swings suspended from the trees. There was an area in the grove that included a few cabins and places to set up tents. Gypsies stayed there a time or two, and her parents often said naughty children would be given to the gypsies.

As a child, she recalls tipping her head back with her eyes to the skies, watching for Russell Maughan to fly over in his airplane as he made the famous 1924 flight from New York to San Fransisco from dawn to dusk — a trip of nearly 4,000 miles that he made in 21 hours 48 minutes and 30 seconds. He average speed was 150 miles per hour. Lucy said Maughan, a Cache Valley native, planned to fly over his parents’ home as he made the westward journey.

“My neck got so tired looking up so high in the sky,” she said. She was 8 years old, and it was the first time she had ever seen an airplane. “When I finally saw the plane, I couldn’t imagine how that plane could stay up there.”

Her first big trip was a wagon ride to Greenville — now North Logan. Her dad borrowed a wagon and set up some chairs in the back for the trip. “That seems like such a long way to go,” she said.

Lucy said her family was poor so “we didn’t talk about going to college.” But at the same time, even though it was the Depression, she didn’t know she was poor — they had more than enough to eat, and while she may not have had as many dresses as others, she really wasn’t bothered by it, she said.

During the war when food was rationed, Oleo was issued instead of butter, with a capsule of coloring to make it more butter-like. However, because her family had cows, they were able to churn butter and would not use the margarine product. Meals were prepared on a coal stove that had a reservoir on the side to keep water warm. Meals centered around what was in season or what had been preserved, so there was little variety, she said. Her family used kerosene lanterns to light their homes until the first electric lights were available. These were little more than a light bulb hanging from from a wire wrapped in a green-colored fabric. “It seemed very bright after kerosene,” she said.

She was most thrilled when technology brought her a washer and dryer, and she didn’t miss washing diapers in a wash tub with a scrub board, not one bit. Although, she said, it did seem wasteful to only use the water and suds for one load of clothes. While she didn’t go to college, her father was able to get his hands on the coursework for an office management class that she studied at home.

Lucy married Joe Page at 18 and moved to Ogden. During part of their marriage, he was working for the railroad in Nevada, and he was was working on a law course via correspondence. When their first child was 2 years old, Page was killed in an automobile accident and Lucy moved back home to Logan. “My younger sisters were his second moms while I got myself a job as a waitress,” she said.

She later married Joseph Vereen. She had two daughters with him before they ended their marriage, she said.

While working at a restaurant in the center of Logan, Lucy said she met a man who came in to eat with his grown son. As she was serving them, the man, Jim Ellis, asked her if she knew someone he could hire for secretarial work. She fell back on her training in office management and went to work for him — a partnership that ended in marriage.

The couple bought their home in 1944, a two-acre parcel of land purchased for a total of $4,200. “It was a repossession, and my husband gave them (the prior owners) $200 because he felt bad for them,” she said.

The couple worked together building up Ellis Equipment to be a successful farm implement distribution company and adding one more child to their menagerie of his, hers and theirs. But just 10 years later, Lucy found herself widowed again, with four children between the ages of 4 and 19. Lucy continued to run the business along with other family members.

The company’s first office building was in her home, located right next door to the business, so she was able to keep track of the kids or do the wash as she was managing the business. Even when an office was built within the business, she was just next door, and the kids were back and forth, so it all worked out well, she said.

“We’ve always worked together,” she said. “We were never ‘step’ — we were just family.”

Lucy still lives in that home, where she is healthy and fully independent.

Reprinted with permission from the Herald Journal and thanks the Clair Ellis, Owner/Manager of Ellis Equipment Co., Logan, Utah, for sending the article to the EMDA office.